Oh my gosh things have been so busy that I forgot to post that Jen Tynes' wonderful Magnificent Field press published my chapbook The Boar King about a month ago.The cover is, from left to right, my Uncle Louis, my aunt Chaya, my father Leo, circa 1910. Chaya died a few years later from one of those childhood diseases that no-one gets anymore. 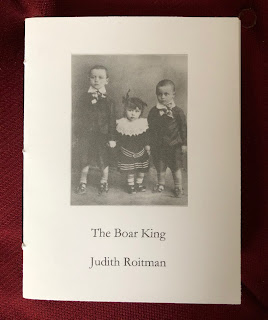 Posted by Judy Roitman at 7:01 PM No comments:

My new chapbook Provisional is out from Dancing Girl Press, cover from a drawing by the excellent Lee Chapman. 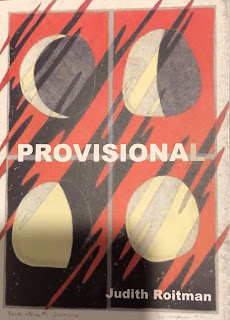 Posted by Judy Roitman at 6:45 PM No comments:

My book Roswell is out from Steve Tills' theenk Books. Years in the making, folks. Hope you like it. Here's the link. (Scroll a little to find it.)
Posted by Judy Roitman at 9:22 PM No comments:

I'm delighted that my article on kong-ans (a.k.a. koans) has appeared in the fall 2018 issue of Buddhadharma. Unfortunately it isn't accessible online unless you have an online subscription, but at least it's there. As always, thanks to BD editor Koun Franz and the rest of the excellent BD staff.
Posted by Judy Roitman at 7:14 PM No comments:

Steve Clay published my homage to Lee Chapman & her First Intensity Magazine and Press in his interweb series From a Secret Location which acknowledges and documents the small and even micro presses and journals that keep poetry vibrant. You can find it here.
Posted by Judy Roitman at 7:56 PM No comments:

I have a piece in the spring 2017 Buddhadharma. Its title: There Is No Author. Roland Barthes, Kanye West, and So Sahn. And (editing two years later) you can now read it online.
Thank you to Koun Franz and the other Buddhadharma and Lion's Roar staff people.
Posted by Judy Roitman at 8:01 PM No comments:

Surfing the web I found this wonderful review of No Face that Dale Smith put up on Bookslut back in July 2008. Original URL is http://www.bookslut.com/marsupial_inquirer/2008_07_013233.php but who knows how long it will be there...

No Face, by poet and mathematician Judith Roitman, maximizes the strategies of techniques of serial poetry to create brief narratives. Rather than relying on an expressive rhetoric of personality or the objective deployments of plot and character, these poems trace an experience of the world. Each page questions accumulated details of one’s life, from phenomenal objects to personal “thoughts,” appetite, and desire. Roitman uses language to discover environments rather than determining them, and the experience of reading these serial works gives readers an opportunity to reflect on their own habits of mind and attention by way of her compelling example.
Formally, Roitman’s writing puts the serial poem to work in different ways. The opening poem, for instance, is written in long lines. It organizes the space of the rhetorical situation to inquire about relations between poet, words, and an outside world. She writes:
The mystery of the inhabitants. The mystery of the staircase,
of the rug, of the refrigerator left shining, of the random
lamp still plugged in.
The lie of saying what you are expected to say
and the lie of hewing to ideology.
The lie of saying what you have been taught
and the lie of trying to please everyone.
The lie of categorizing
and the lie of defying categories.
The lie of saying you eat matzo
and the lie of eating it.
The lie of telling the family they will not be killed,
and the lie of the woman as she strapped her husband in.
These lies subvert common assumptions about how we are socialized, opening awareness of an uneasy relation to others through the categories we use to describe the world, even as those categories are imposed distillations of our own projected disorder.
Elsewhere, the nameless narrator and characters are revealed through a rhetorically strategic language that de-emphasizes the role of the poet in order for the poem to apprehend a common world.
Because everything depends on the body.
Because my word isn’t your word.
Because it is so hard to remember.
Because he moved restlessly through the house at night.
Because she convinced herself she could see through walls.
Because she was in two places at once.
The questions and answers in this book are distributed incongruently, leading a reader to reflect on the process of questioning and answering -- that they share essential goals in language, to unhinge stuck modes of thought.
Other poems turn to a floating, broken-line verse while some are composed as prose. In one, “Cosmogonies,” Roitman opens, rather than narrates, a reflective field through which she meditates on cosmic relation. She examines the contribution of quotidian form to how we understand cosmos. “As a lizard waits in the sun,” she writes, “so taste starting as light on tongue expanding into more light & color spreading like cloth in winter.” With this she notes, “[t]he origin is lost we have not found it but coolness, every year another disease and the seduction of etymology to believe we can understand it.”
Roitman’s writing examines the process of thinking and feeling, but in ways that remind us language, more than thought and sensation, is at stake in our apprehension of the world. There are directions and paths in these serial narratives through which we find the unexpected.

Posted by Judy Roitman at 12:25 PM No comments:

Judy Roitman
This blog is focused on poetry. Other links are available, but the focus is on poetry.